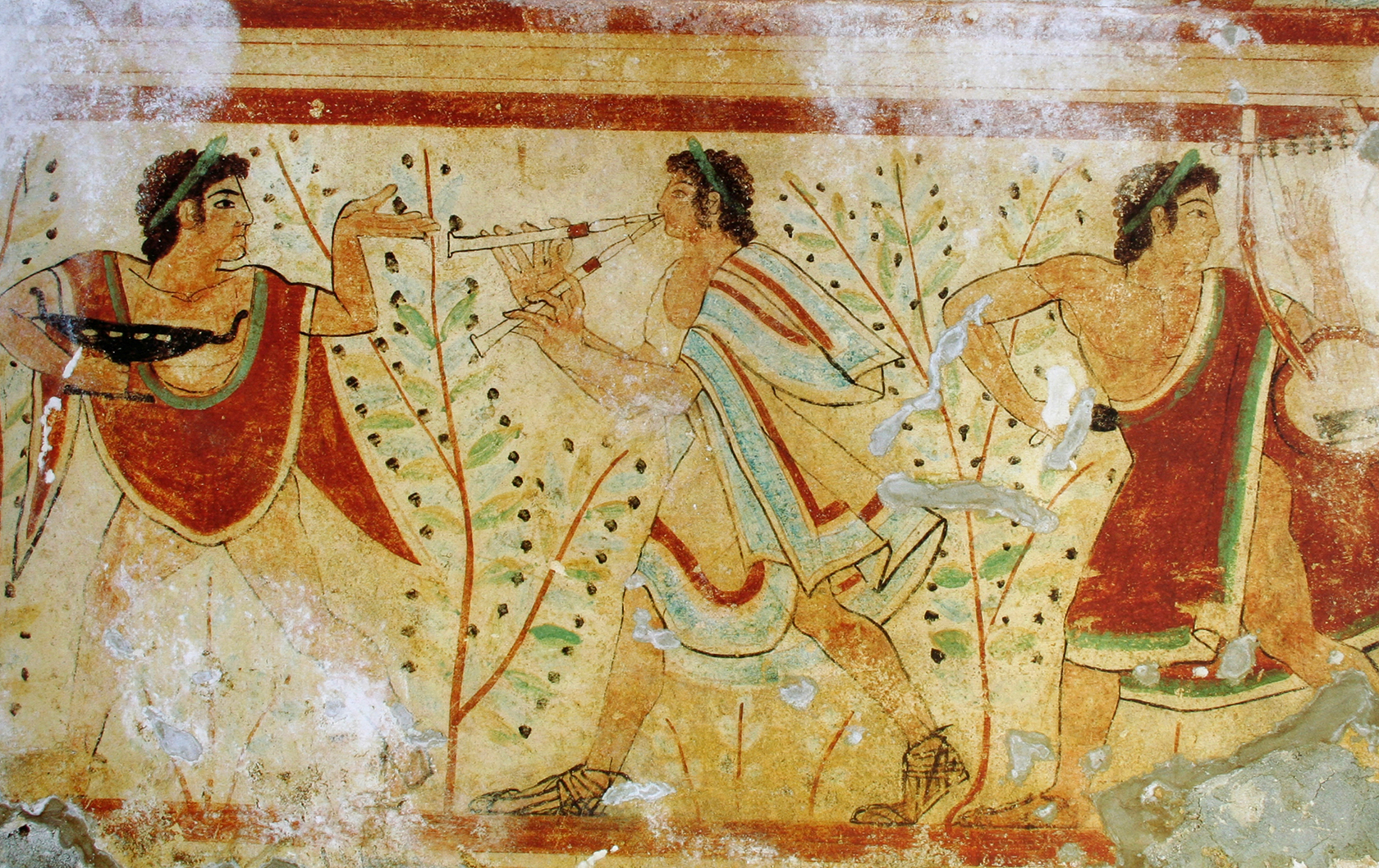 It’s nearly impossible to travel through Italy without cruising past ancient Roman relics, whether in the form of imposing city gates, buildings in various states of preservation or museum collections of statues and frescoes. But the history of Italy doesn’t start with the Romans, and indeed much of what we might think of as their quintessential artifacts actually predates the period by hundreds of years. Yes, well before Caesar or Tiberius took their places as Emperors there were kings, cities and states ruled by the Etruscans, a civilization whose origins lay shrouded in mystery and whose influence is still felt on some of the most important areas of modern-day Italy. While remnants of the Etruscans are found throughout the country, some of the most impressive sites are a stone’s throw away from Rome. Enrich your stay in Rome with a day trip or two to fascinating Etruscan sites.

Who were the Etruscans?

The earliest evidence of the Etruscan civilization dates from 900 BC and at its height reached from present-day Campania in the south up to the Po Valley near modern-day Veneto and ran along the Tyrrhenian coast. The highest concentration of Etruscan settlements, however, were largely found in the center of the country, and cities and towns throughout the regions of Lazio, Tuscany and Umbria all bear distinct traces of Etruria, or the land of the Etruscans. That said, little is known about the origins or lives of the Etruscans: they spoke a distinct language that has never been fully deciphered and of which only short passages have ever been recovered. It is only within the last twenty years that DNA samples have shown a more direct relationship to Turkish civilizations than their Italian neighbors.

What is known about the Etruscans is that they had a great deal in common with Ancient Greek culture, and many of the relics that have been found were either imported from Greece or were copied in the same style. We also know that they had a uniquely egalitarian society where women held equal status with men in both public spaces like banquets and funereal rituals (highly important at the time), unlike most other civilizations whose practices have been recorded. Inscriptions on recovered buildings and structures show that women were allowed to inherit property and also suggest that they were literate, possibly even holding influential political or spiritual positions within society. 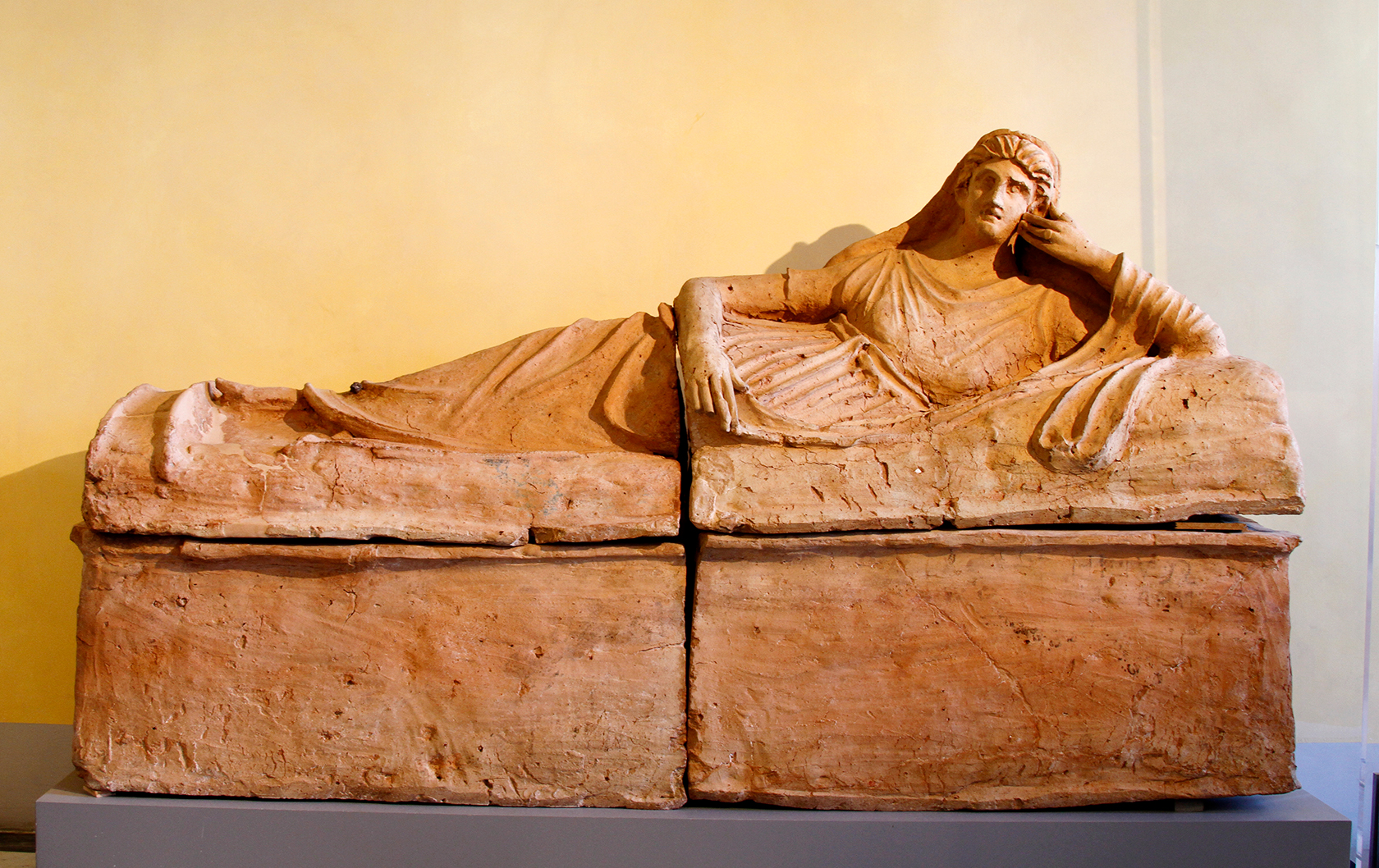 We also know that while the Etruscans were distinct from the Romans, the latter adopted many of the innovations that have been subsequently attributed to the former. We have the Etruscans to thank for the cuniculus, a system of water tunnels and reservoirs that helped to control erosion and divert water into multiple sources for human use. Without these cunicoli, the aqueducts for which the Ancient Romans are so famous might never have been built. Likewise, the Etruscans were sophisticated builders and the urban planning that turned Rome from a primitive settlement into a thriving metropolis began during the period when Etruscan kings ruled the area. Aesthetically, the Etruscan influence on architecture (having introduced the arch to Rome), design and rituals was adopted into Roman culture. Perhaps the reason that we have such a hard time defining exactly where Etruscan ends and Roman begins is ultimately this absorption from one civilization to the next. Indeed, even the quintessentially Roman character of the gladiator has Etruscan roots, as does the word “people.” The Etruscan civilization may not be so mysterious after all, just buried under some of the more recent layers of history.

What happened to the Etruscans?

It seems that the demise of the Etruscan civilization began around 500 BC, nearly 200 years after the kingdom had attained its most expansive domination. This decline is most likely due to a number of factors. The city of Rome, which had been under Etruscan rule, gained its independence and within it, the organized armies and hierarchies that would become the Roman Empire began to take shape. Because Etruscan cities had only ever formed loose affiliations and never joined as a unified front, they were defeated by a growing Roman force in the first waves of expansion. Apart from the advancing Romans, the Etruscans faced threats from the Greek navy in the Tyrrhenian sea and from Celtic tribes that came from the north.

Both on land and sea, the commercial and military might the Etruscans had once displayed suffered one defeat after another until rulers eventually retreated behind the heavily fortified walls of the hill towns they so favored. Once they had been isolated, it wasn’t long before these settlements capitulated. Etruscans themselves were integrated into what became the Roman Empire through intermarriage and birth, and the cities that they created took on a central role in the development of sophisticated infrastructure networks that still stand today. 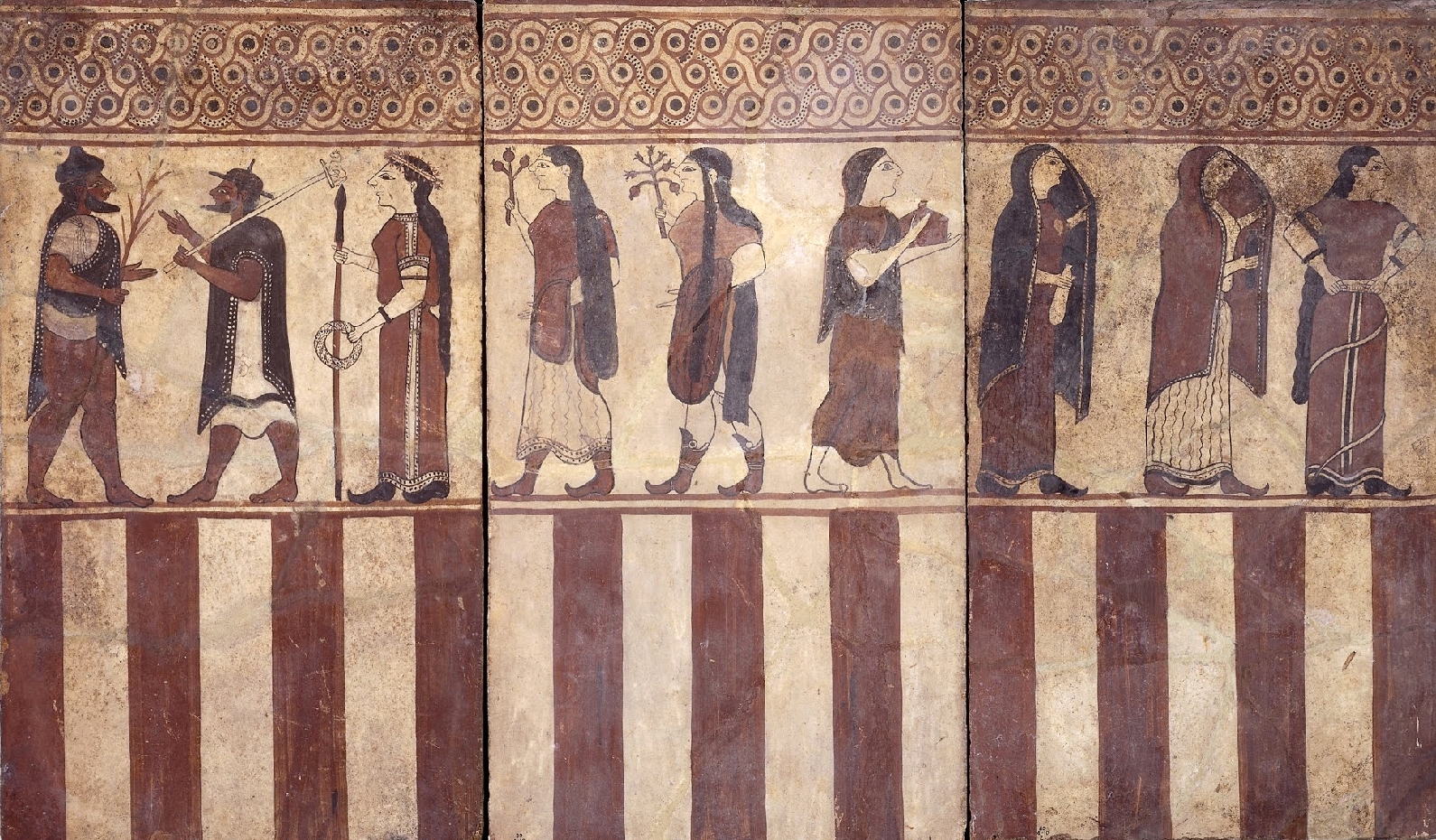 Etruscan tomb painting from the Necropolis of Cerveteri (Credit)

When the English writer D.H. Lawrence came to live in Italy, he settled into a villa near Florence but wound up spending the better part of his time exploring the area that had once been Etruria. These wanderings would form the basis for Etruscan Places, one of his many travel diaries and perhaps the most intimate. Lawrence wrote about the “wild” country that was dotted with relics of an ancient civilization that had been lost to time and Roman hegemony, and to remedy this he wrote a series of essays on some of the more impressive sites. Almost one hundred years later, Etruscan Places is still an accurate portrayal of the landscape and the richness to be found there.

Retracing the steps of the Etruscans is an opportunity to visit some of the most extraordinary yet under the radar destinations in Italy. Chief among these are the stunning necropoli, vast cities of the dead which were some of the most symbolically important locations for the Etruscan way of life. The same sites that D.H. Lawrence sketched with his words are just a short trip away from Rome and make a fantastic day trip for those looking to learn more about the extraordinary heritage of an extraordinary people. 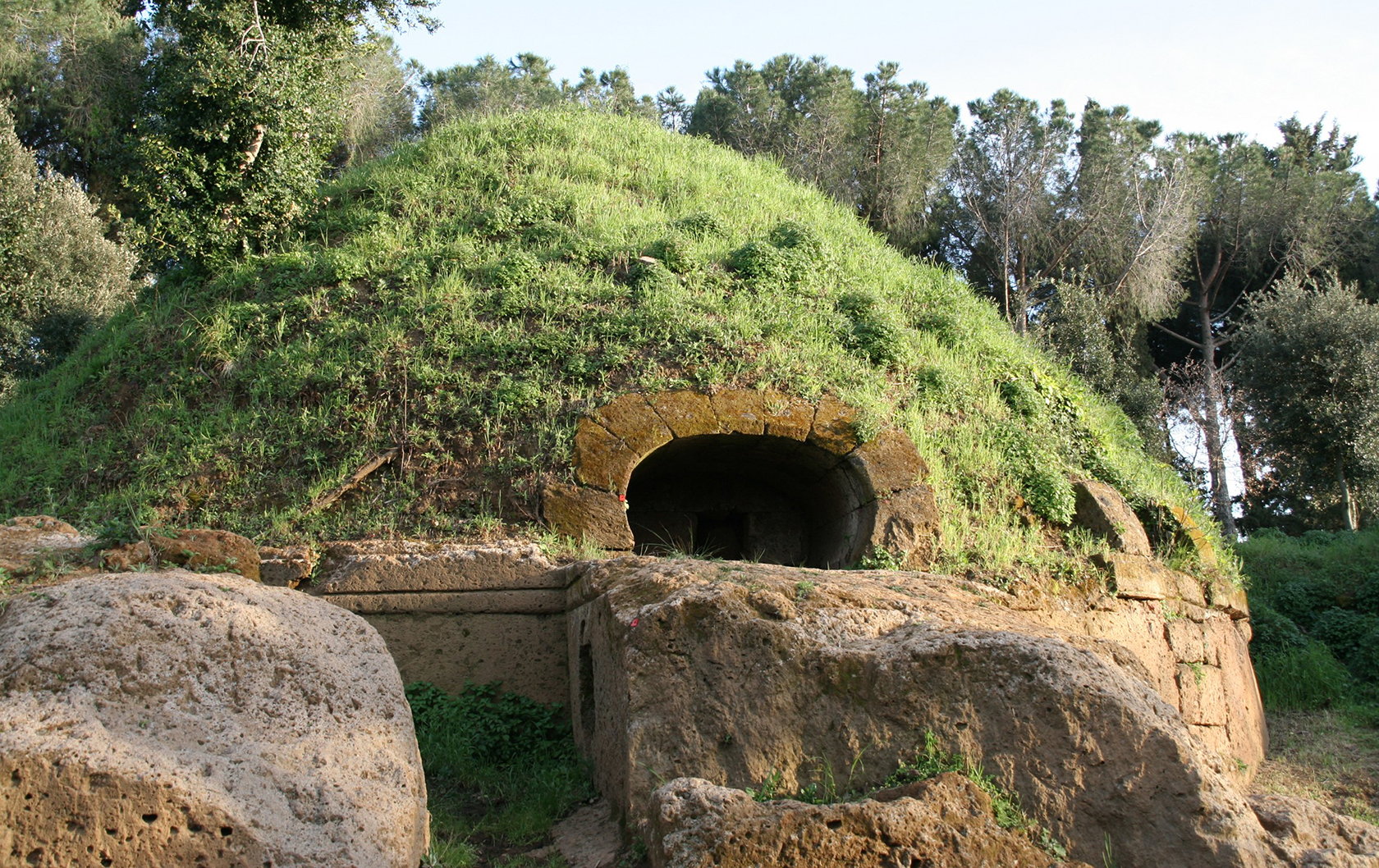 The Banditaccia Necropolis of Cerveteri

Although Etruscan sites dot the landscape throughout Umbria and Tuscany, one of the more spectacular examples is a short drive from central Rome and well worth dedicating some time to. The Etruscan Necropolis of Cerveteri, locally known as the Necropoli della Banditaccia, was the main burial site for the Etruscan city of Caere and is the most impressive example of both the architectural ingenuity and artistic importance that the Etruscans placed on the afterlife. Located on a hill overlooking the Tyrrhenian coast about 40 km north of Rome, the Necropolis of Cereveteri covers about 2 square kilometers and dates from the 7th to 1st centuries BC. Its incredible time span means that the artwork in the tombs, which the Etruscans were known for, acts as a chronicle for almost the entire Etruscan period.

Cereveteri was the resting place for some of the richest families in Etruria and the discovery of the Regolini-Galassi Tomb in the 19th century uncovered a literal treasure trove of gold, silver and copper ornaments that were used to decorate this ancient resting place. While many of the more precious items were transported to the Vatican museum for safekeeping, visiting the tomb itself is the chance to marvel at the architectural innovation that has allowed structures like these to remain standing for millennia. Not all of the wealth has been spirited away, however: the Tomb of the Reliefs is decorated in an incredibly unique manner, with stucco work and actual tools and keepsakes from the family plastered onto the walls. This decorative style gives the impression of what may have been a typical Etruscan living space and is one of the best windows into what life might have been like in the 4th century BC. 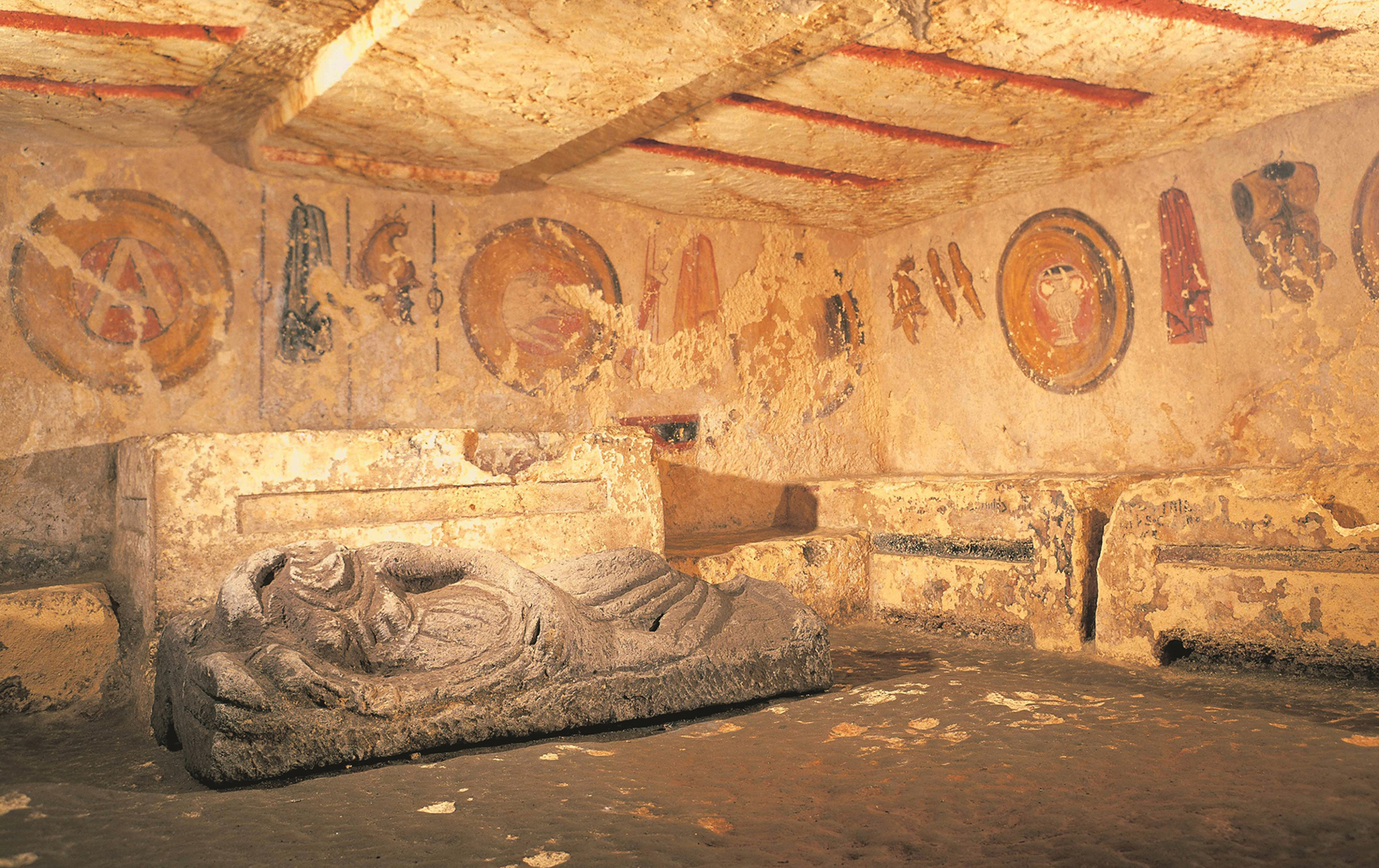 The Etruscan Museum and Monterozzi Necropolis of Tarquinia

A little further up the Via Aurelia, an ancient Roman road that is thankfully now a well-maintained highway, Tarquinia was one of the most important cities in the Etruscan period. The Kings Tarquin the Elder and Tarquin the Younger ruled from high on its hill, with a position overlooking the sea that made it the perfect point to expand Etruscan influence by both land and sea. Today, Tarquinia is a bustling city where tourists mix with locals in the winding alleys and sunny squares that form a near postcard-perfect scene. However, there is more to the city than its bucolic scenes: The National Etruscan Museum at the entrance to the centro storico is one of the richest repositories of Etruscan artifacts in Italy, with sarcophagi dating to the fourth century BC. The noble palace also contains a trove of ceramics, gold and silver coins, and ritual items recovered from tombs over the centuries.

However, the jewel of Tarquinia is the same that D.H. Lawrence wrote about, the Monterozzi Necropolis that lies just east of the city walls. This sprawling landscape contains over 6,000 Etruscan tombs, some of which date to the 7th century BC. Even more impressively, over 200 of these tombs are decorated with frescoes, many of which are remarkably well preserved. The Tomb of the Leopards is one of the most vividly depicted Etruscan banquet scenes that has ever been found, and both the Tomb of the Whipping and the Tomb of the Bulls are rare examples of erotic art depicted in Etruscan art. Some of the more fragile frescoes have been transferred to the Museum for conservation, but many of them are open to the public and offer extraordinary windows into the Etruscan experience. Along with Cerveteri, the Necropolis of Tarquinia is a UNESCO World Heritage site, and after walking through its ancient streets, it’s not difficult to understand why. 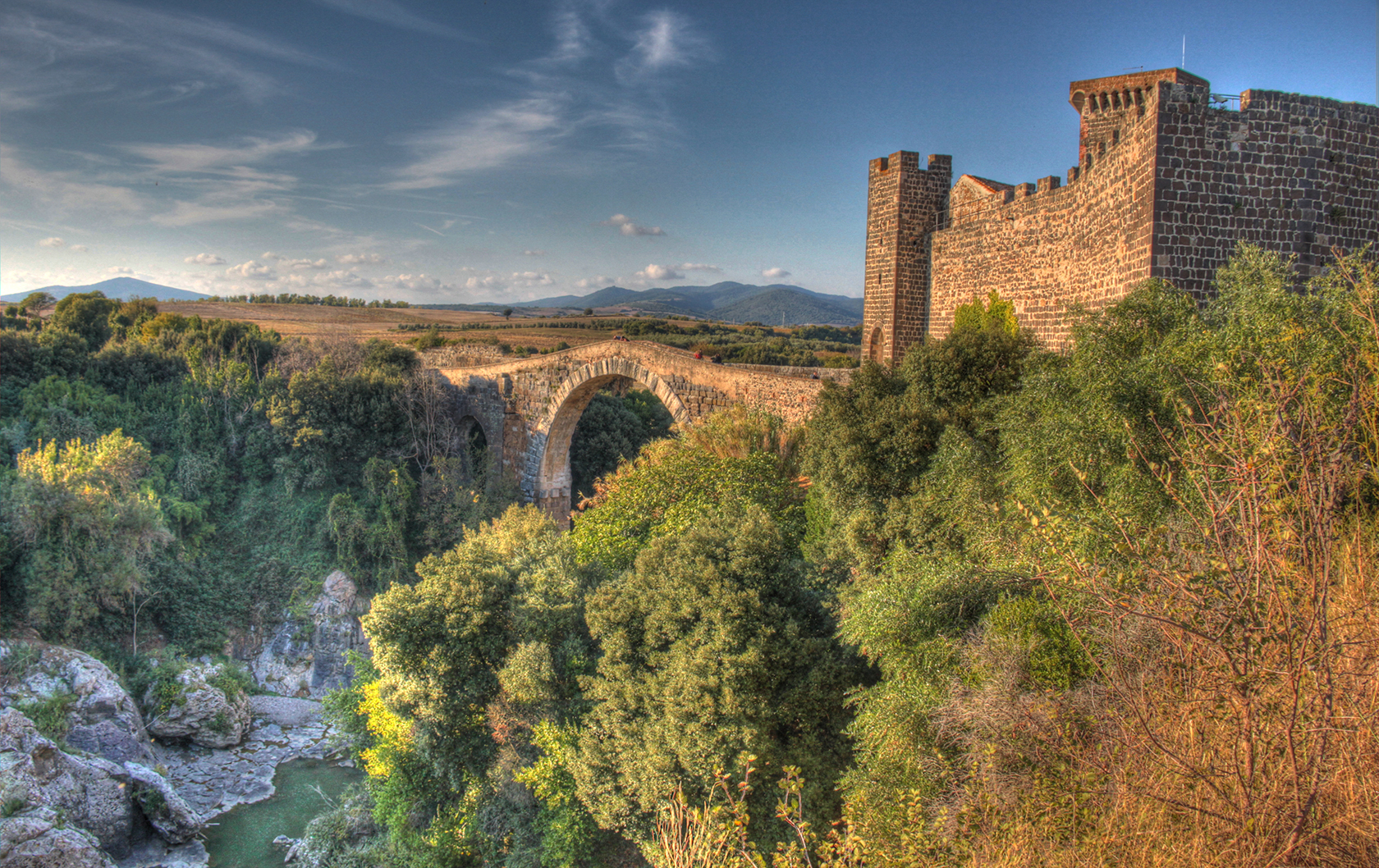 The Vulci Archaeological and Nature Reserve

The vast majority of Etruscan traces border, or are integrated into, contemporary cities and towns. Vulci is one of the rare cities that was not built upon or inhabited past Etruscan times but was instead protected, giving people the extraordinary opportunity to walk through the streets of what would have been a thriving Etruscan city. The Vulci Archaeological and Nature Reserve spans 900 hectares and contains entire structures dating from as early as the 7th century BC as well as Roman ruins built on top of what would have been Etruscan architectural and engineering works. In the midst of pristine waterfalls and sprawling forests, visitors find the remnants of ancient thermal baths, residential villas and the spectacular Ponte dell’Abadia, a roman bridge with Etruscan pillars dating from 90 BC.

There are simply too many fascinating and alluring Etruscan sites to capture in one visit, but some of the most well preserved of them are within easy traveling distance from Rome and make for a perfect day out of the city. The Etruscans continue to be a mysterious and somewhat confounding chapter in the history of Italy, and their legacy is something that travelers must seek out rather than finding it perfectly poised and photo ready in front of them. But this is perhaps what makes it so worthwhile, the subtle hints that point to a life that once was. As D.H. Lawrence said, “Brute force and overbearing may make a terrific effect. But in the end, that which lives lives by delicate sensitiveness.” And that is always a brilliant discovery.

Posted on Wednesday, March 10th, 2021 at 11:27 am in Rome, Travel Planning. You can follow any responses to this entry through the RSS 2.0 feed. You can skip to the end and leave a response. Pinging is currently not allowed. 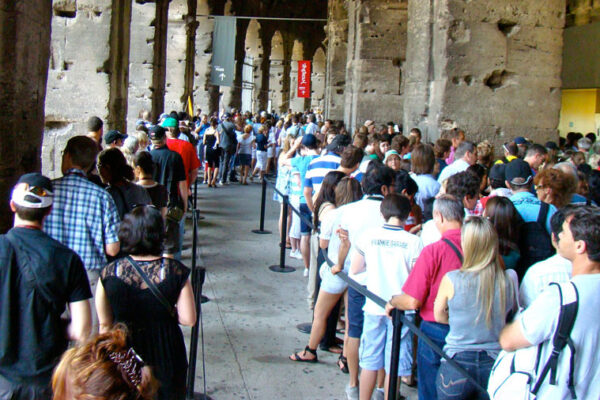 Five Rome Sites to Book Ahead

Roman Cooking in the Family 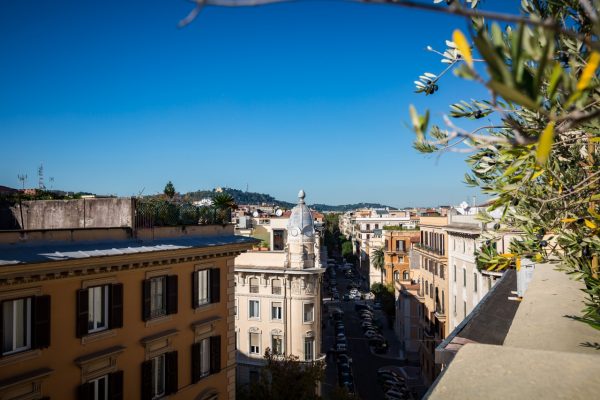