Our Guide to Florence’s Oltrarno Neighborhood 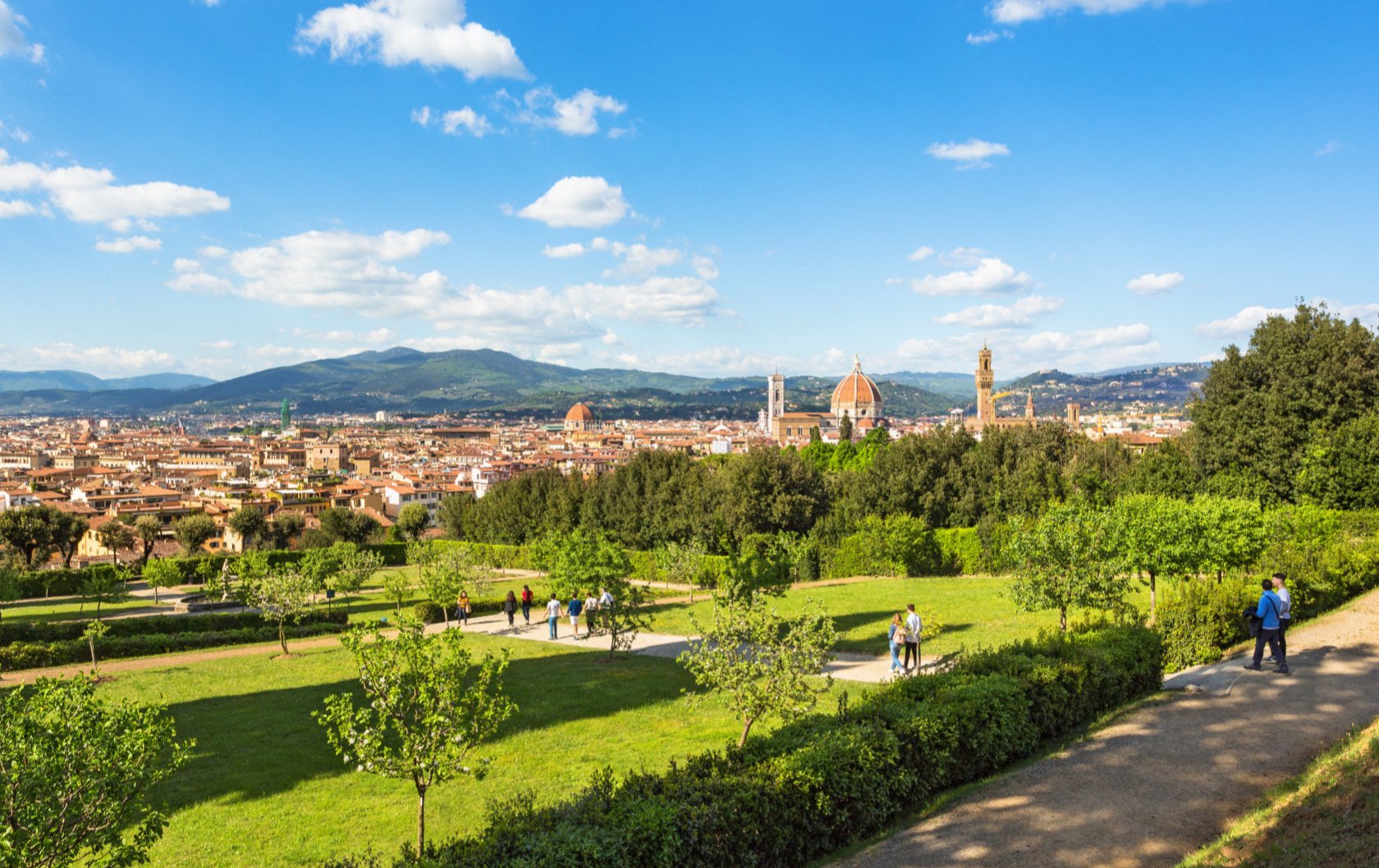 It’s easy to fall in love with just about every corner of Florence, but one of our favorite areas to stay in and explore is the Oltrarno neighborhood. The name means “the other side of the Arno,” and refers to the area south of the Arno across from the historic center around the Duomo. Simply crossing the Ponte Vecchio takes you right into the heart of the Oltrarno, which is a chic neighborhood full of incredible historic sites, expansive gardens, artistic traditions and the best views of Florence. Enjoy some of our favorite things to see and do in Florence’s beautiful Oltrarno neighborhood! 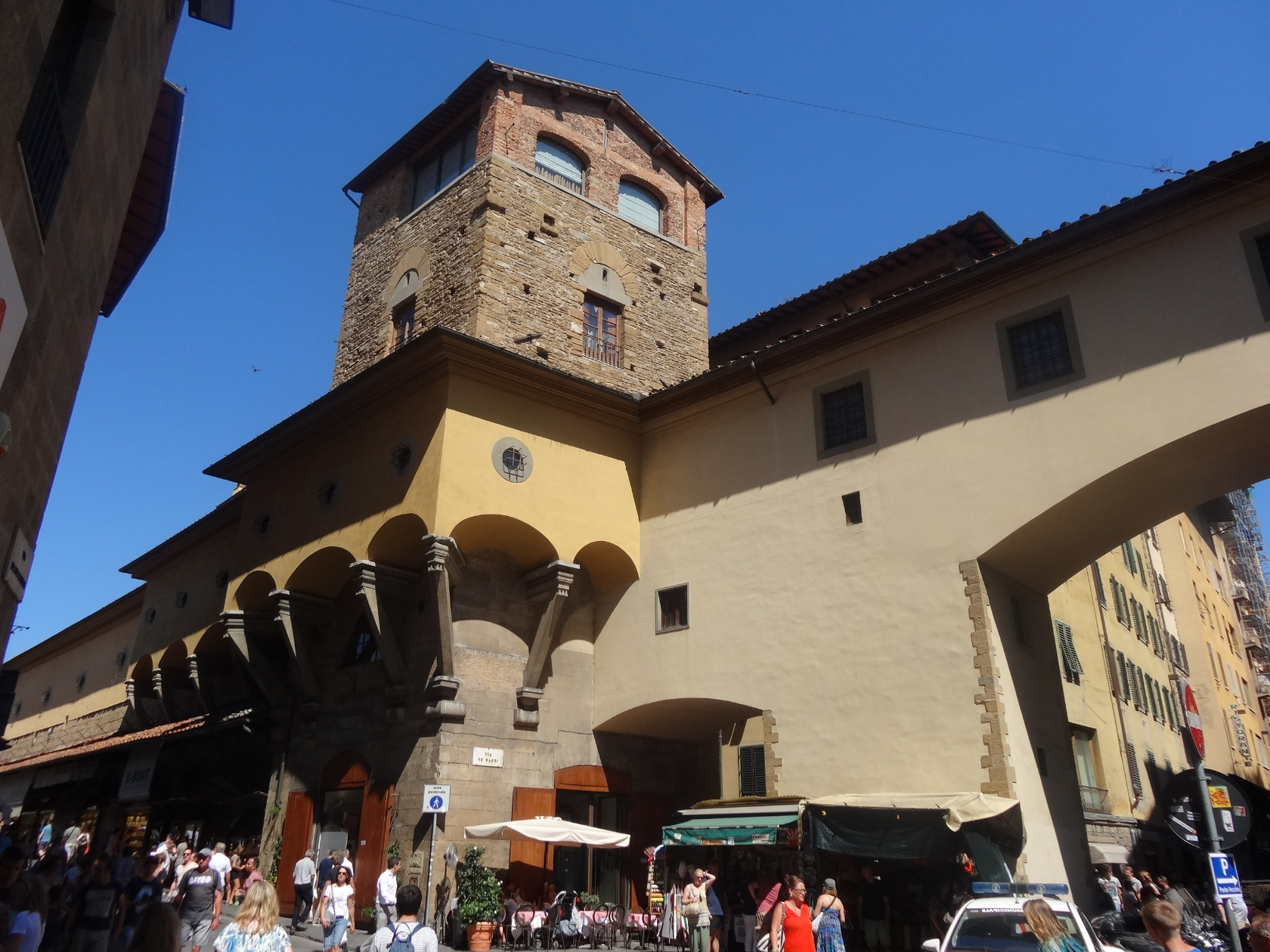 The Vasari Corridor passing around the Torre dei Mannelli on the Ponte Vecchio. (credit)

Crossing over the Ponte Vecchio you’re following the same route the Medici family took from Palazzo Vecchio to reach the Palazzo Pitti, their lavish residence starting in the 16th century. In fact, along the way you can look up and see the Vasari Corridor, which was their above ground private passageway through the city. Just steps from Ponte Vecchio following the beautiful Via de’ Guicciardini, you’ll spot a little piazza with the 15th-century Column of Santa Felicita and just beyond the Church of Santa Felicita.

A church has been located on this site since about the 4th century, but the one there nowadays dates from the 18th century. If the facade of the church looks a bit odd, that’s because the Vasari Corridor passes along the front of the church. If you go inside and look up above the entrance, you’ll spot a large gated window where the Medici family could listen to mass without being seen by anyone inside the church. 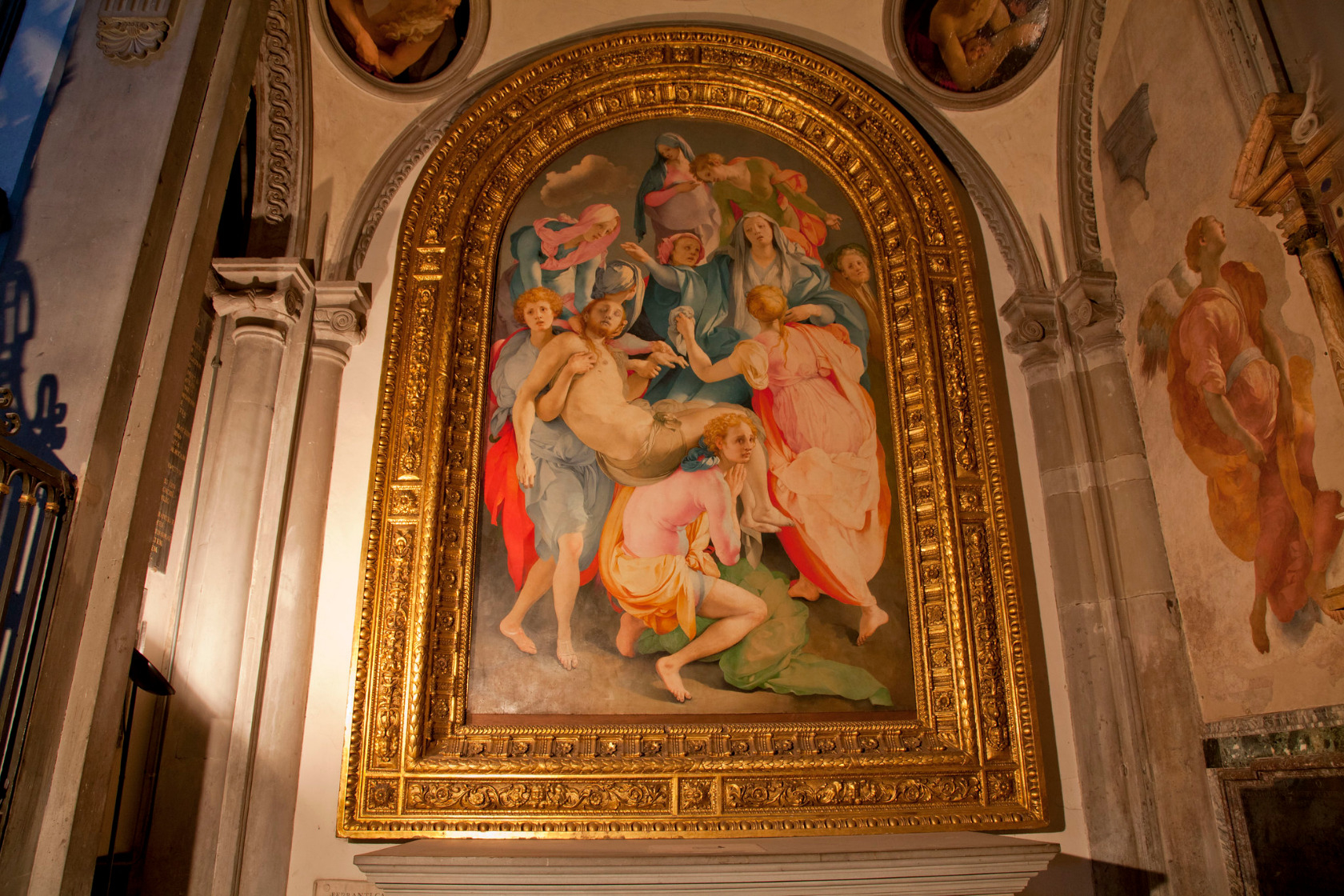 Pontormo’s Deposition from the Cross in Santa Felicita. (credit)

For art lovers, however, there’s a real treasure inside Santa Felicita that you won’t want to miss. Just inside the entrance on the right is a small chapel designed by Filippo Brunelleschi—the architect of the Duomo’s massive dome—that was decorated by Pontormo, a 16th-century painter whose style marked a change in Renaissance painting that was later called Mannerism. Here you’ll see two of his masterpieces. The Deposition from the Cross is beautifully lit to show off the brilliant colors of the oil painting and is set in shimmering gilded frame. On the wall to the right are frescoes of the Virgin Mary and Angel Gabriel also painted by Pontormo.

You’ll find the Ponte Vecchio and Santa Felicita just moments from our one-bedroom Casetta Bonsi apartment or one-bedroom Carina apartment, both of which put you in a perfect location in the Oltrarno. 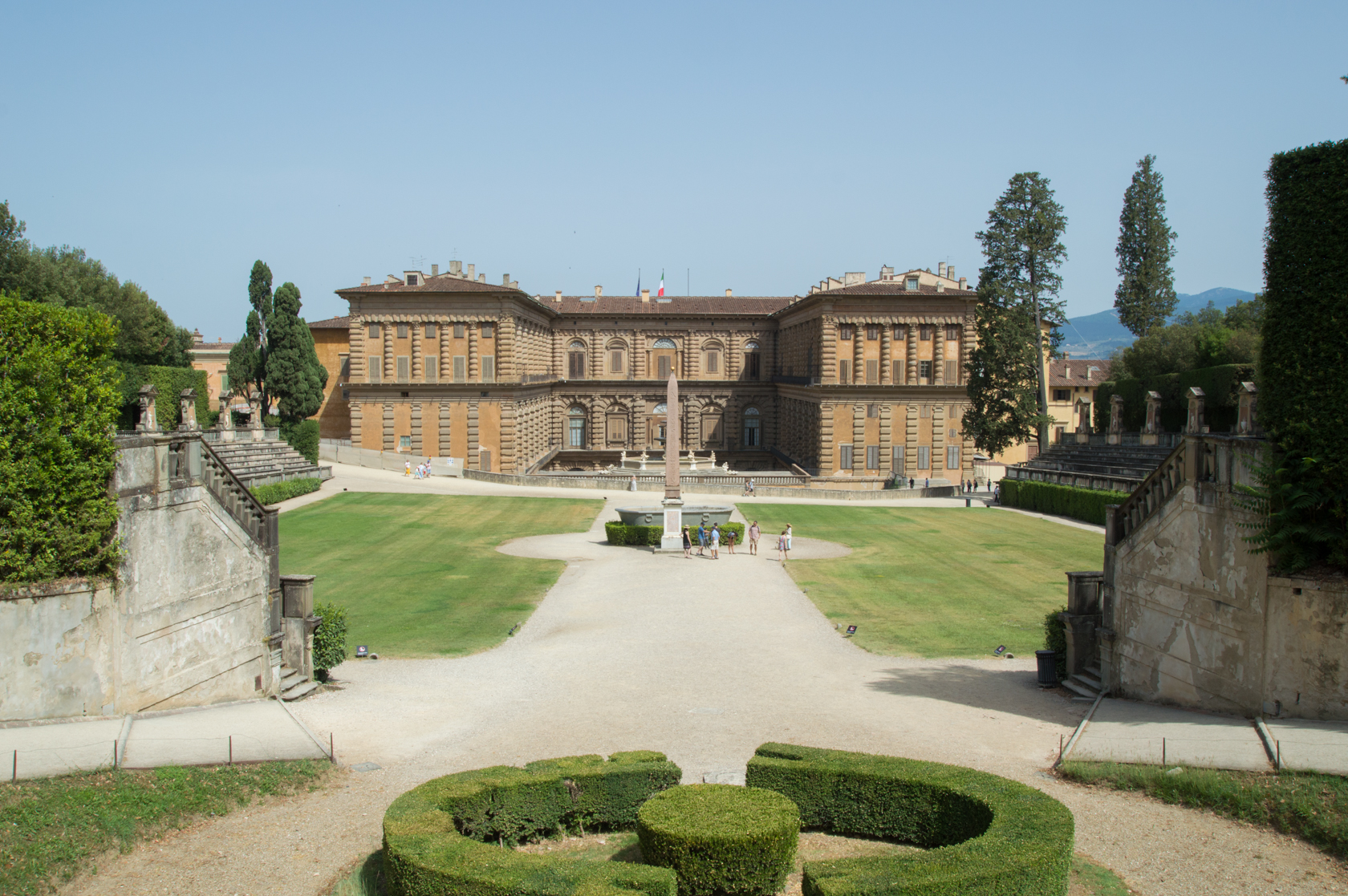 The grand Palazzo Pitti from the Boboli Gardens

Follow Via de’ Guicciardini to Palazzo Pitti, set atop a grand sloped square that draws your eye from every spot to the impressive entrance of the Medici family’s palace. Starting in 1549, this enormous palazzo and the beautifully landscaped gardens were home to the rulers of the Grand Duchy of Tuscany and it was filled with an incredible collection of art and luxurious decorations. As the largest museum complex in Florence, a visit to the museum is a must for art lovers or anyone interesting in learning more about the Medici family.

As you pass through the lavishly decorated rooms of the Palantine Gallery and the royal apartments, you have the rare chance to see hundreds and hundreds of fine works by Renaissance masters hung largely as they would have in a private collection as originally intended – rather than a traditional museum setting. Imagine living with your walls covered with works by the likes of Raphael, Peter Paul Rubens, Titian, Correggio and Perugino. Just be warned that Stendhal syndrome can set in quickly in the Palazzo Pitti galleries, so you’ll need a breath of fresh air. What better place than the Boboli Gardens just outside? 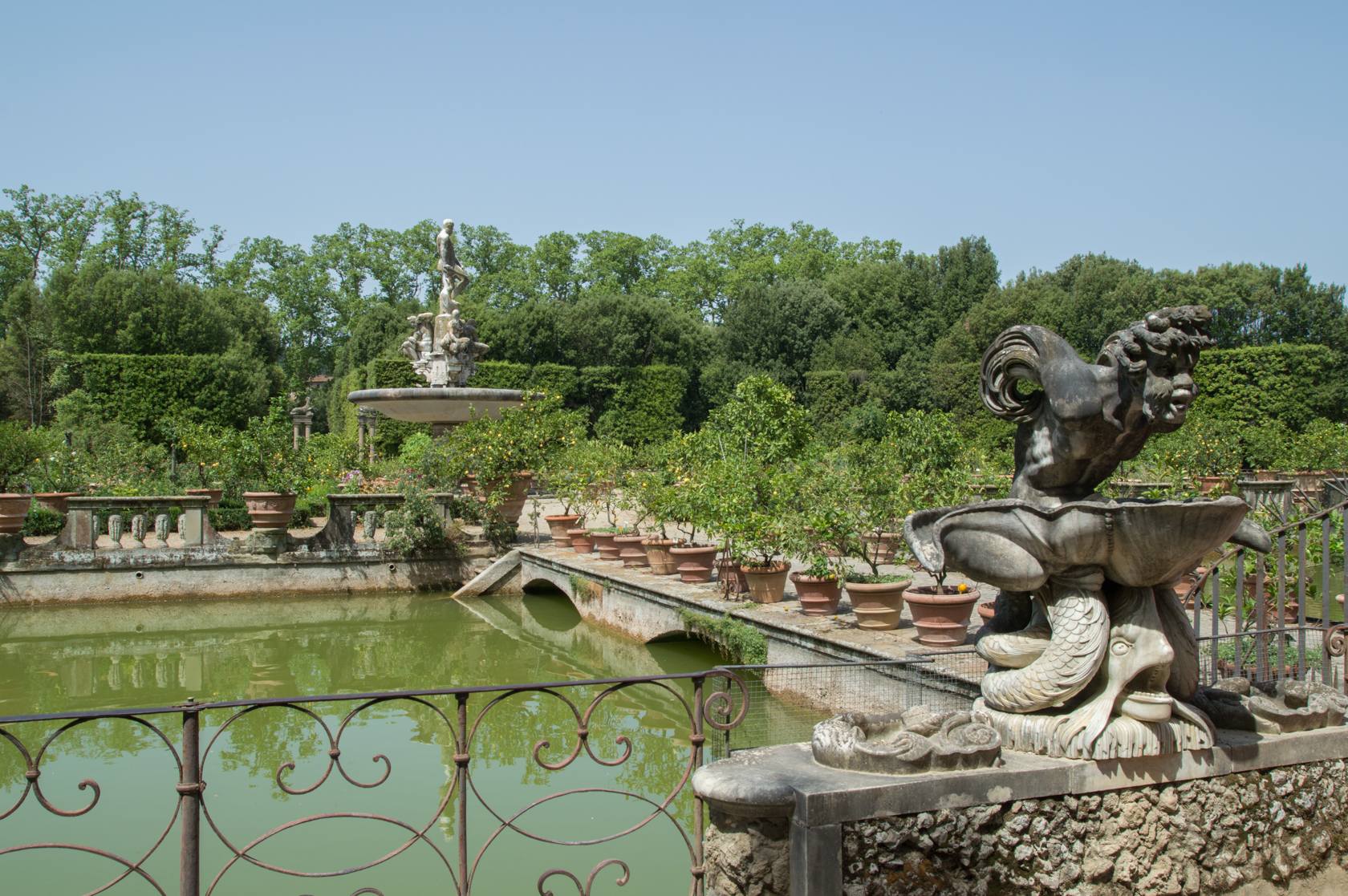 Splendid fountains in the Boboli Gardens.

Created in the 16th century for the Medici family, this enormous landscaped garden covers about 111 acres and spreads up the hillside behind the Palazzo Pitti. Far bigger than you might expect to find right in the heart of Florence, these beautiful gardens have been open to the public since 1766. Now you can stroll along the stone pathways and imagine the regal setting in the 16th century. Although there are some finely framed views of Florence and the Duomo from right near the entrance to the gardens behind the Palazzo Pitti, be sure to climb to the top of the gardens to the Palazzina del Cavaliere, which houses the Porcelain Museum, for the best views. Look across the hillside to spot the San Miniato al Monte Basilica and enjoy the lovely gardens before exploring more of the Boboli Gardens.

Want to avoid the lines and get direct access to the Boboli Gardens? This Skip the Line Boboli Gardens tour is our top recommendation. You can also enjoy a glimpse of the Palazzo Pitti and Boboli gardens from our three-bedroom Felicita apartment with a prime Oltrarno location. 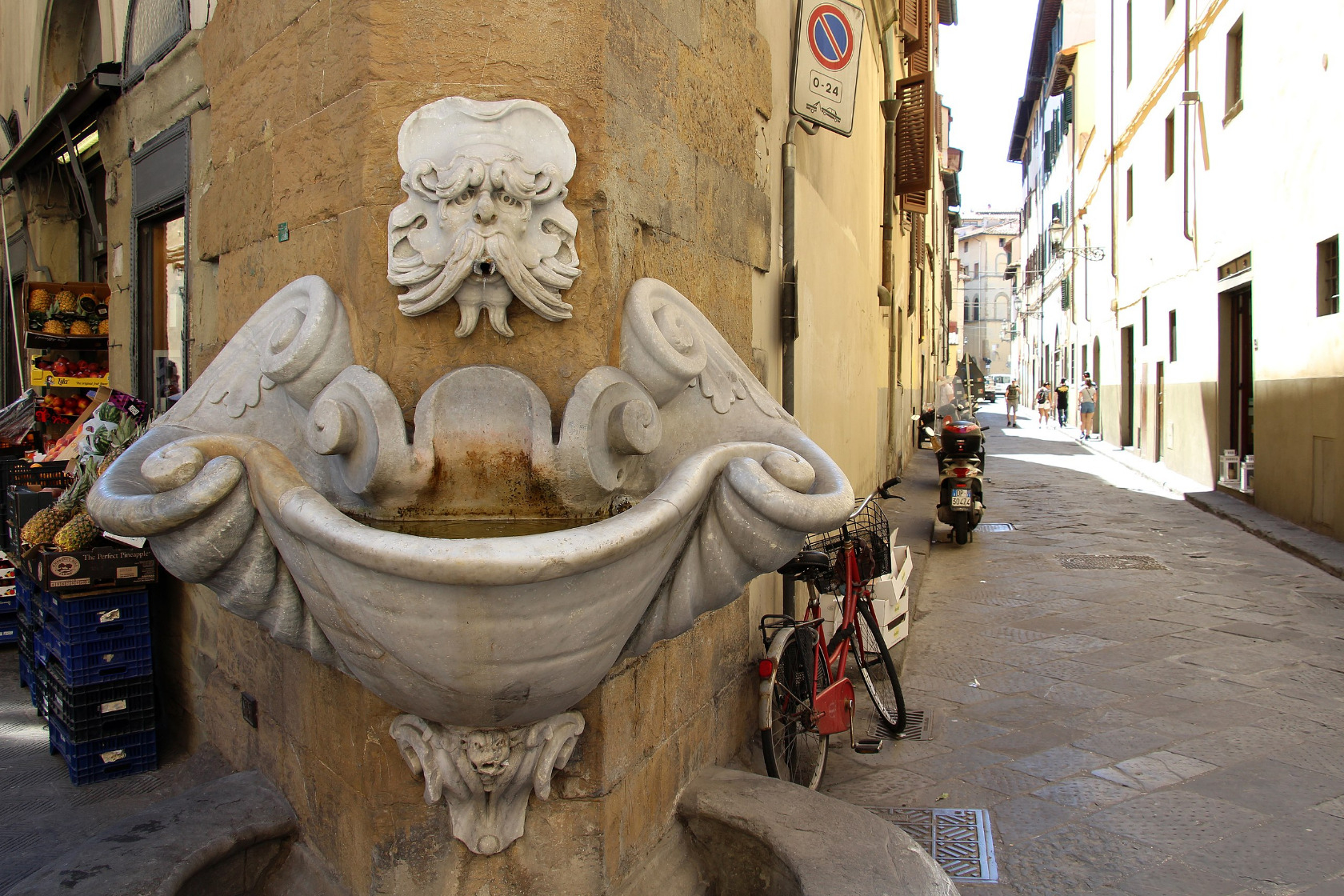 Exploring the Artisan Traditions of the Oltrarno

After the expansive gardens, it’s time to meander into heart of the Oltrarno district, which is full of narrow streets, beautiful piazzas, and excellent shopping and dining. The best way to experience the Oltrarno is to simply meander through the narrow streets, which even on busy summer days are refreshingly quiet. Along the way you’ll pass little boutiques, antique shops, and our favorite experience, small artisan workshops that keep the neighborhood’s artistic traditions alive. Stop to see jewelry makers, bookbinders, frame makers gilding frames, and all types of creatives at work.

For a refreshing break, stop at Gelateria Della Passera, one of our favorite gelato shops in Florence, which is set on the charming little Piazza della Passera. You’ll also find our Bardi and Gardenia apartments in an excellent spot nearby.

While out strolling, keep in mind that some shops in this neighborhood will close during lunch from about 1pm to 3 or 4pm so you might find it even quieter during those hours. When you head over to visit the Brancacci Chapel, don’t miss a stroll down Borgo San Frediano, considered one of the coolest streets in Florence. 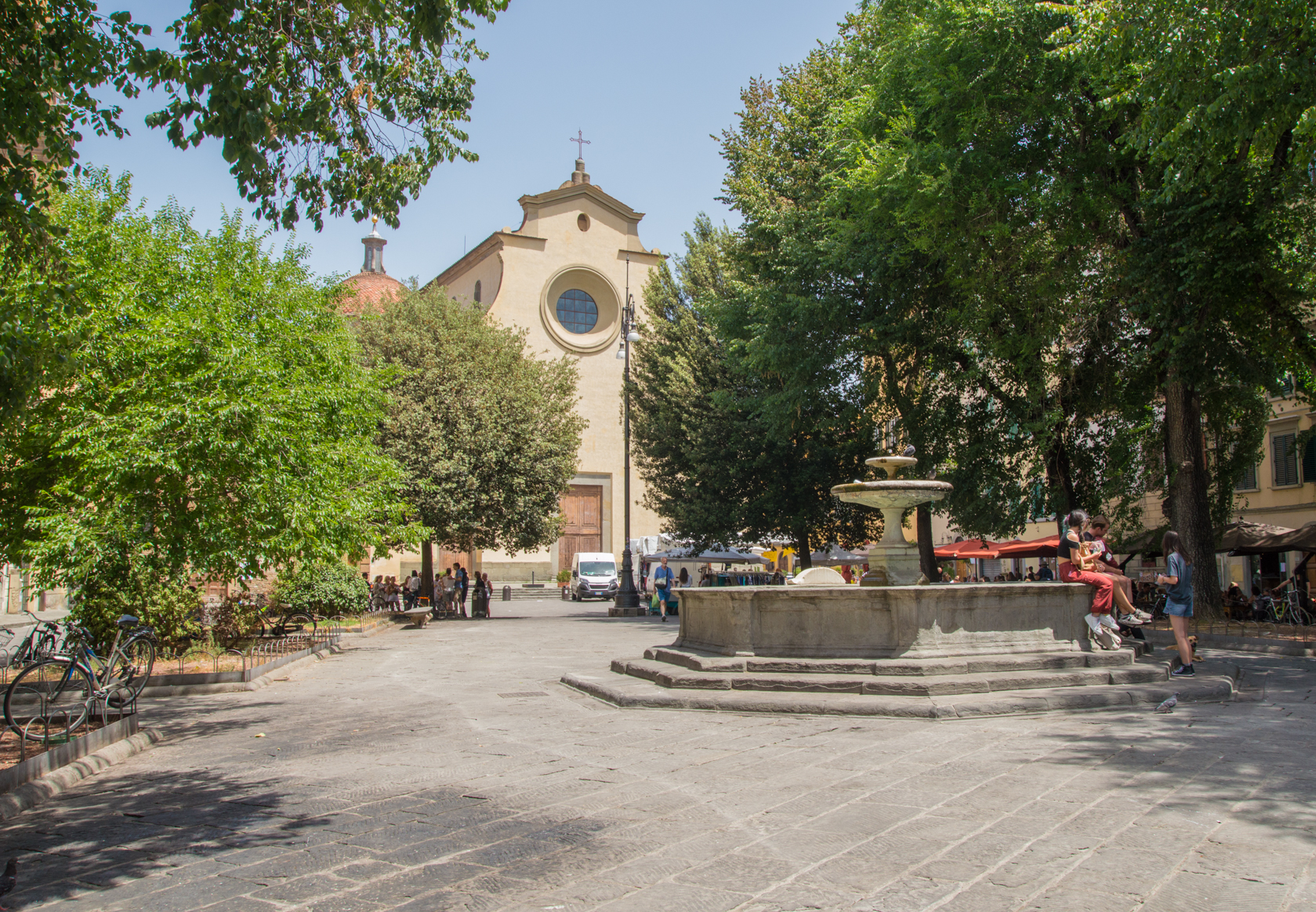 Relax in a shady spot in Piazza Santo Spirito.

Hang Out in Piazza Santo Spirito

The heart of the Oltrarno neighborhood in many ways is the Piazza Spirito Santo. The leafy tree-lined square is surrounded by restaurants and cafes where you can find activity throughout the day and most certainly in the evenings when the Florentine movida begins. We love passing through the square during the day to stop at the open-air market to pick up fresh fruit and veggies, but it’s also a great place to eat or stop for a drink anytime of the day and night.

Of course you’ll also want to visit the Basilica di Santo Spirito while exploring the Oltrarno. Although the facade is quite simple, inside you’ll find one of the finest Renaissance churches in Florence. Construction began in 1444 and this church was the last project designed by Filippo Brunelleschi, the city’s most famous architect. 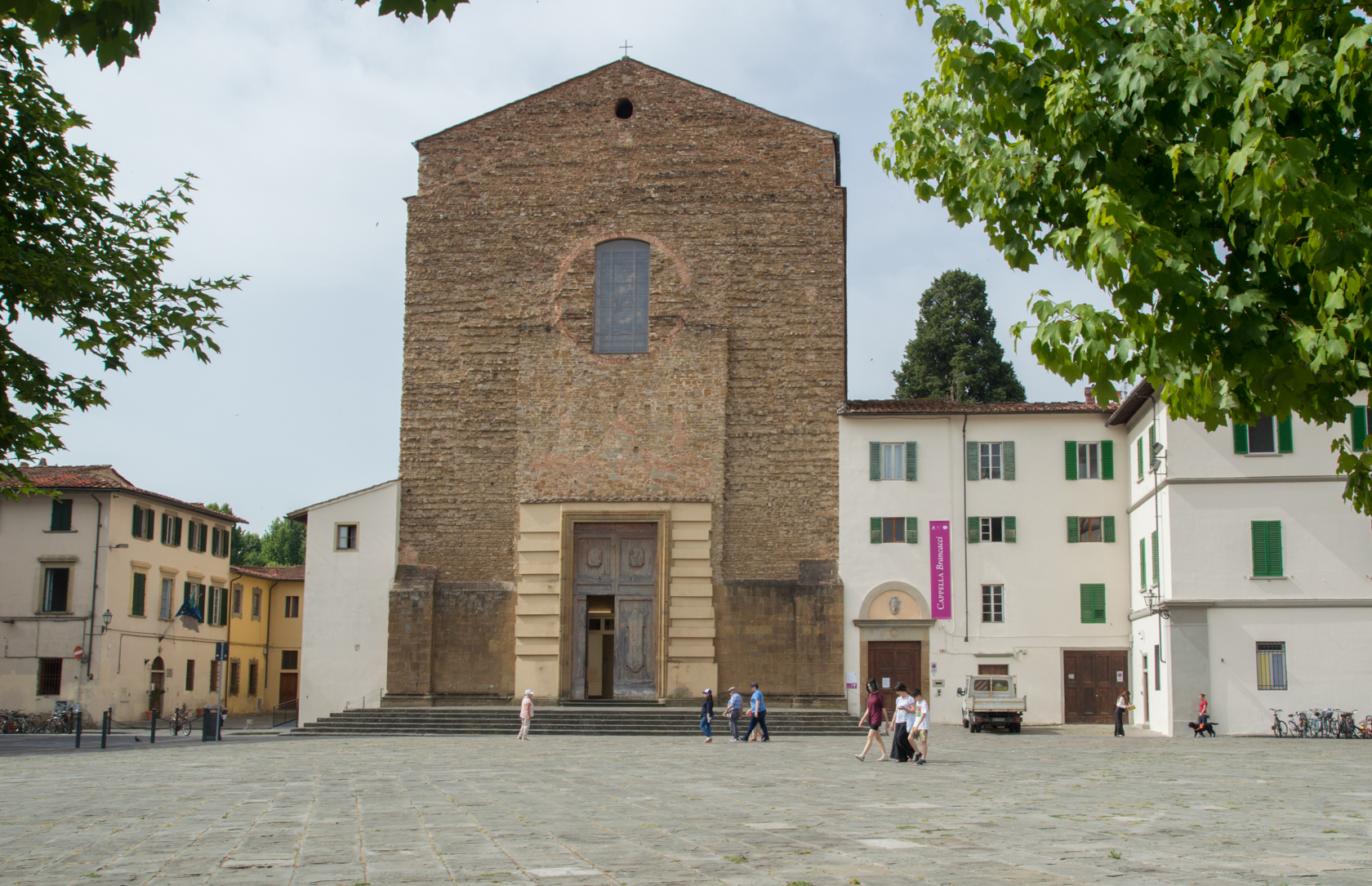 Head to the Piazza del Carmine to see the Brancacci Chapel.

Renaissance Glory at the Brancacci Chapel

Meander through the historic streets over to Piazza del Carmine, a large square with the Church of Santa Maria del Carmine. Construction began in the 13th century, but the church was significantly damaged by a fire in 1771. The soaring interior is now largely in the Rococo style, which is quite a contrast to the stark facade, which like the Basilica di San Lorenzo in Florence was never finished. 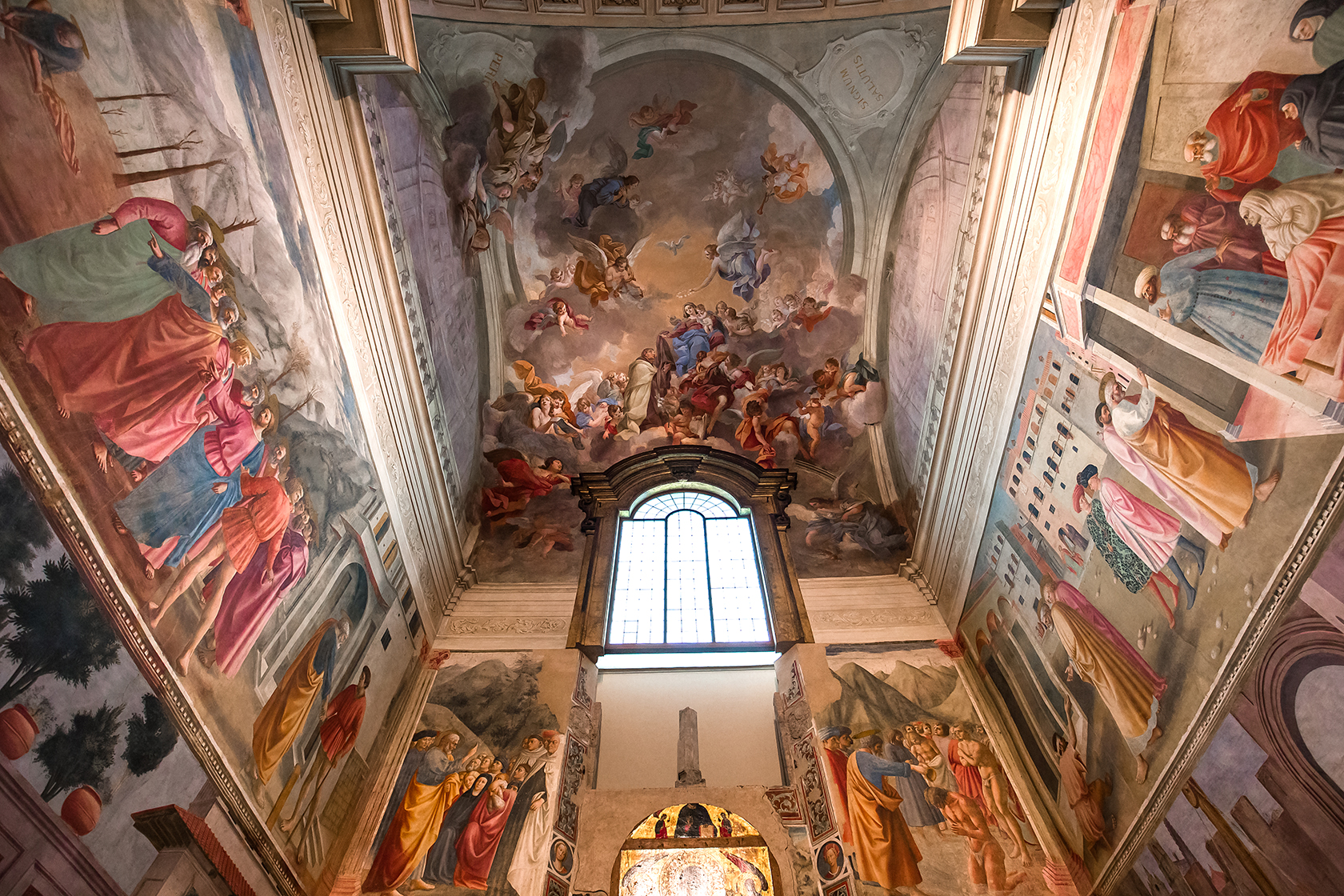 Mesmerizing beauty in the Cappella Brancacci.

However, the treasure that draws most visitors to Santa Maria del Carmine is the remarkable Brancacci Chapel, which survived the massive fire in the 18th century. Here you’ll find frescoes by Masaccio and Masolino, which are some of the most important early masterpieces of the Renaissance. The chapel decorations were commissioned in 1425 by a wealthy Florentine merchant, Felice Brancacci, and here the master painter Masolino, working with his student Massacio, created a series of frescoes depicting scenes from the life of St. Peter that captures a sense of space and depth unlike anyone had seen before.

Both Masolino and Massacio were called away by other projects before the chapel was complete and some of the frescoes and decoration were finished by Florentine artist Filippino Lippi. Called the “Sistine Chapel of the early Renaissance” for the intensity of its beauty, it is an absolute treasure to visit. However, do check Brancacci Chapel website in advance as the hours are limited. 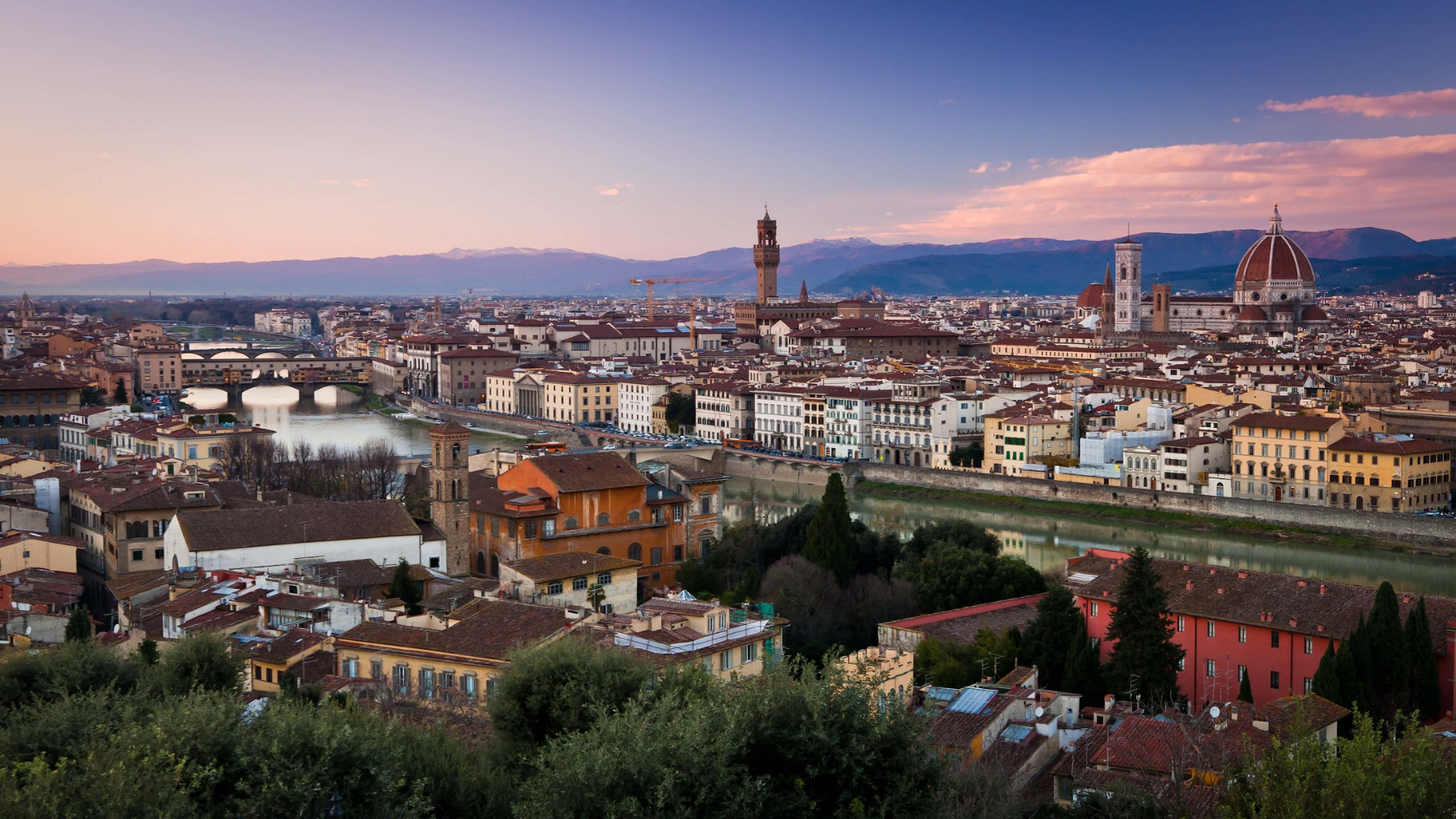 Panoramic view over Florence from the Piazzale Michelangelo. (credit)

Finding the Best Views in Florence

Once you start spending time in the Oltrarno neighborhood you’ll keep coming back for more. We love the atmosphere and great shopping but the absolute best part of spending time in the Oltrarno are the views and the beautiful gardens and open spaces right in the heart of the city. Check out our Florence Walking Tour with Beautiful Views that takes you from the Ponte Vecchio past incredible museums, the Bardini Gardens, the 14th-century Porta San Niccolò watchtower, and up to the incredible overlook at Piazzale Michelangelo and the fascinating San Miniato al Monte Basilica. All of this is right at your doorstep in the Oltrarno neighborhood!

Posted on Thursday, August 25th, 2022 at 4:19 pm in Florence. You can follow any responses to this entry through the RSS 2.0 feed. You can skip to the end and leave a response. Pinging is currently not allowed. 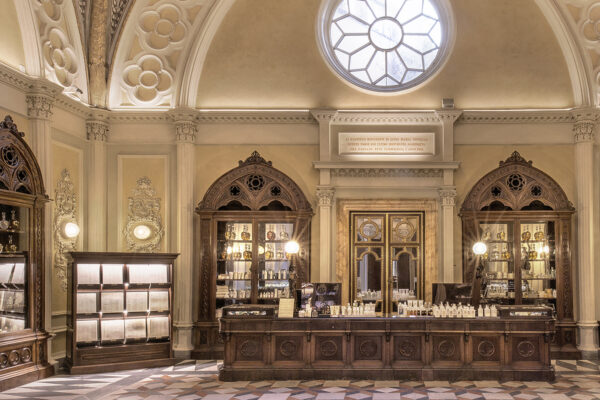 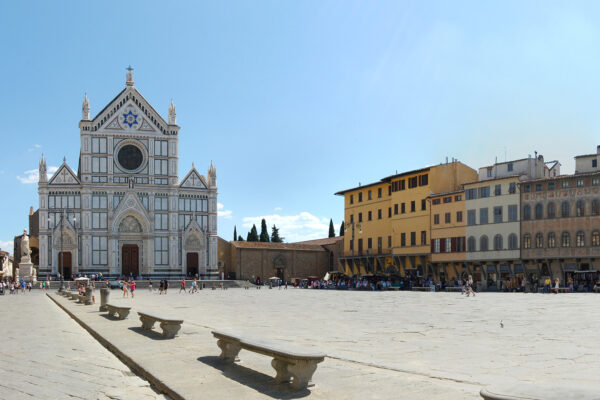 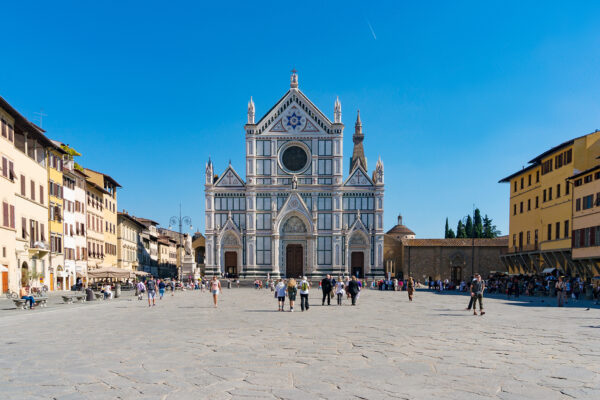 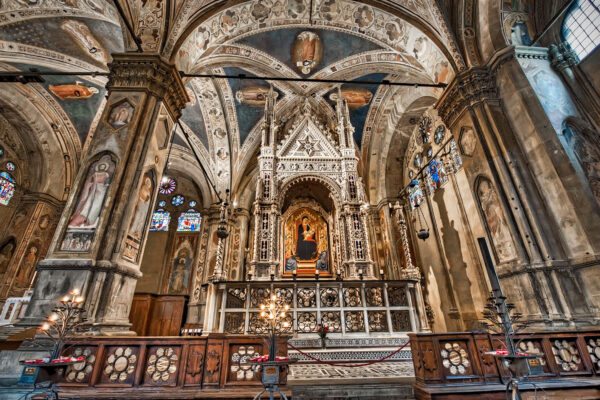