Why has a single statue managed to capture the minds of millions, held gazes enraptured,

struck awe in the hearts of admirers? Maybe it is the story: David, the original underdog manifested in marble. The mind’s eye fills in the gaps:

Or is it the art of the master: the curls of hair, the casual stance, the severity of his stare –all demonstrating the skill of the craftsman as he closes the gap between stone and reality? Is there a glimmer of concern in his expression? Perhaps, but only just enough to create a sense of camaraderie with the viewer.

Whatever the reason, travelers who stop in Florence flock to see Michelangelo’s great work The David. It has, after all, stood as one of man’s greatest artistic creations for the last 500 years. The name cannot be mistaken.

One of the most asked questions by our Italy Perfect vacation rental guests is how and where to see the David. Before heading off to see Florence’s great statue, it is imperative to make sure that the destination is The Statue of David in Florence. Emphasis on the because no one wants to spend the day walking about just to realize they are at one of the the other statues of David.

Make no mistake: each is worth seeing, but only one was carved from a 12,500 pound slab of white marble by Michelangelo Buonarroti himself.

One of the “other” David’s is a bronze replica standing in the Piazzale Michelangelo. This beautiful prominence  is located on a hill overlooking Florence with some of the best views of the city itself. Michelangelo would likely be pleased with this tribute to his success.

The Piazzale Michelangelo is walkable from the city center, but buses are available for those who see the up-hill climb as a little too daunting. Once there, the statue of David is in the open for all to see and beyond it a beautiful view of the city including the meandering Arno river and the dome of the Duomo reigning over the city that has changed little in its panorama in 600 years.  Interestingly, this statue was commissioned to adorn the Cathedral itself, but would have been difficult to view in its intended position – near the roofline.

The Piazzale Michelanglelo is also home to the beautiful byzantine San Miniato church and a sprawling cemetery. Be sure to see all of the sights before heading

back down into town.

The second replica stands in the Piazza della Signoria, accompanied by the works of many other famous sculptors. It stands outside the door of the Palazzo Vecchio, just across from Bandinelli’s  Hercules and Cacus. This statue marks the spot where the original stood proclaiming Florence the republic as David standing up to massive monarchy of France .

As beautiful as the Piazzale Michelangelo and Piazza della Signoria Davids are, if one is going to see David, they should see The David. To do this, head to the Accademia Gallery. This popular gallery is the home to numerous famous works – including Michelangelo’s “Slaves” and Giambolona’s “The Rape of Sabines.” With so many incredible pieces, it is no wonder that the museum is also known for being busy and, along with the crowds, for having long lines. Fortunately there is the option of booking ahead to skip the line. Art-enthusiasts will be pleased to see that a variety of package deals allow visitors to save when they opt to see both the Accademia and Uffizi galleries. The latter is home to equally impressive works of art, including 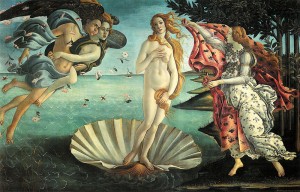 Botticelli’s “The Birth of Venus” alongside the works of Caravaggio, Titan, and Giotto. Together these galleries stand in a class of their own.

While each of Florence’s three Davids offers a unique experience,  when making the choice there is no wrong answer – particularly if one opts to see them all!

One thought on “Florence: A Tale of Two (Extra) Davids”